20 Most Influential Women Authors Of All Time 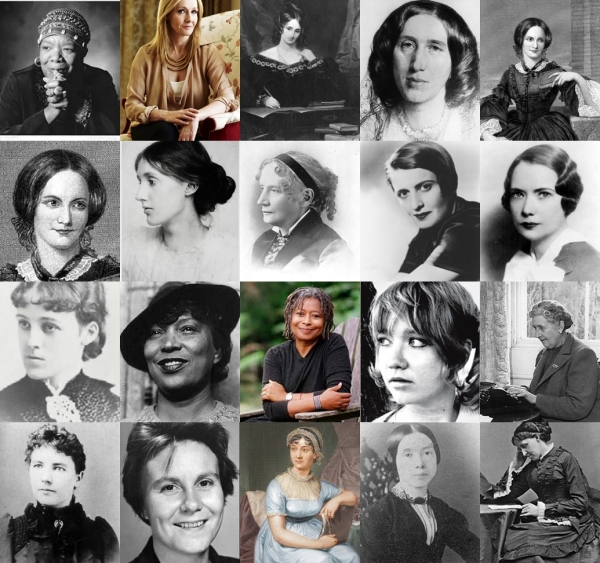 Reading LM Montgomery got me to thinking of who the most influential female authors really are.  Here is my list of the top 20 female authors of all time.

Maya Angelou
She is arguably the most famous African-American autobiographer and poet in history. Angelou broke the mold when she wrote her six autobiographical volumes in a nontraditional structure that completely changed the genre. Angelou opened up to readers and shared her controversial life stories without shame or censorship. Her candidness and unique literary style pushed the boundaries for all female writers and changed the face of autobiographies forever.

JK Rowling
This British author is one of the most widely read female authors in history. Her popular Harry Potter series combined whimsical fantasy and inspired a generation of children to get excited about reading. Her books ahve also inspired readers on a social, moral, and political base. Even her personal story of rags to riches has influenced readers to never give up on their dreams.

Alice Walker
The author of “The Color Purple” holds the title of the first African-American woman to win a Pulitzer Prize for Fiction. Walker’s writing career and personal life has mostly centered on race and gender ineqaulity. Her written work and political involvement have made her a respected figure amoung African-Americans and female readers around the world.

SE Hinton
American novelist S.E. Hinton is best known for her young adult books, most notably, “The Outsiders”. Hinton began writing “The Outsiders” at 15 years old and it was published when she was 18 years old. Hinton became a household name and instant success with “The Outsiders”, which still sells more than 500,000 copies each year. Hinton has made a lasting impression with her literary work that effectively connects readers to the emotions and experiences of teenagers.

Agatha Christie
British crime writer who produced popular novels, plays and short stories. Christie is the best-selling female author of all time and the most translated individual author. Christie’s commercial success and public appreciation came from her masterful writing skills and ability to build a suspenseful whodunit plot with well-developed characters. Not only did Christie pave the way for crime writers, but she also inspired female authors of all genres to follow suit.

Laura Ingalls Wilder
Most widely known for writing the Little House series of books, specifically the Little House on the Prairie. Wilder based these novels on her childhood and growing up in a pioneer family. Wilder’s compelling stories and mastery of literary techniques helped set the precedent for future children’s books.

Harper Lee
American writer best known for her 1960 Pulitzer Prize winning novel To Kill a Mockingbird. It is Lee’s only published book, but the critically-acclaimed bestseller made quite an impact on its own. Much of the book is autobiographical and details what Lee saw as a child growing up in the South. The powerful story deals with racial inequality and injustice in the Deep South.

Jane Austen
Jane Austen is best known for her popular romantic fiction novels, such as Sense and Sensibility, Pride and Prejudice and Emma. Austen’s work is the focus of academic study for scholars and critics because of its historical context and mastery of literary techniques. Austen greatly influenced English literature with her use of literary realism, social commentary and techniques that told the compelling stories of 18th century and 19th century women.

Emily Dickinson
Emily Dickinson was an influential poet whose style was unlike anyone else’s. Dickinson was an innovator, who used unconventional techniques, such as short lines, slant rhyme and unusual capitalization and punctuation that garnered both attention and criticism. During the late 19th and early 20th century, critics denounced Dickinson’s individual style and literary prowess, but later praised her originality and talent as a pre-modernist poet.

Louisa May Alcott
American author Louisa May Alcott was best known for her novel Little Women. Alcott received critical acclaim for her literary work, as well as her involvement in various reform movements, including women’s rights and ending slavery. Through her professional and personal life, she has inspired and empowered women of all ages to be independent and follow their dreams regardless of what society says.

Mary Shelley
A British writer best known for the widely-read Gothic novel Frankenstein. Shelley pushed the boundaries of traditional Romanticism and Gothic fiction when she developed her own brand of the artistic movement that criticized individualism and challenged the traditional 18th century school of thought. Shelley’s work has been at the forefront of feminist literary criticism and academic study for decades.

Emily Bronte
She wrote only one book during her short life, but it would forever change the landscape of English Literature, and capture women’s hearts across the world. Wuthering Heights.

Charlotte Bronte
Best known for her novel Jane Eyre, which was written under her pen name Currer Bell. Although she had a small number of published works, Bronte made a significant impact in both the literary world and society by highlighting the daily struggles of oppressed women in her written works.

Virginia Woolf
A literary genius who broke the mold for 20th century novelists. The modernist was known for her experimental fiction writing and influential feminist essays that enlightened readers on Britain’s class and gender differences. Woolf’s work has impacted readers, writers, historians, scholars and all those who’ve studied her innovative work and mastery of the English language.

Harriet Beecher Stowe
Stowe changed history with her influential anti-slavery novel Uncle Tom’s Cabin. Not only was Uncle Tom’s Cabin the best-selling novel of the 19th century, but it also played an important role in the development of the Civil War. Stowe was a progressive thinker and fierce abolitionist, who wrote about real life issues of inequality and stereotypes and had the power to open up millions of Americans’ hearts.

Ayn Rand
Ayn Rand was a Russian writer who is most widely known for her two best-selling novels The Fountainhead and Atlas Shrugged. Rand’s written works were heavily based on her political views and emphasis on individual rights. Her books received vast amounts of praise and criticism, but were commercially successful, nonetheless. Rand’s eye-opening work has impacted various political, social and academic fields and encouraged readers to re-evaluate their political and ethical views.

Margaret Mitchell
Best known for writing the American classic Gone With the Wind. The novel was an instant success, selling more than a million copies in the first six months. Mitchell won the Pulitzer Prize for her wildly popular novel. Mitchell changed history when she wrote arguably the best romantic novel of all time. Not only did the story capture the hearts of millions of readers worldwide, but Mitchell’s masterful use of symbolism and treatment of archetypes made it truly original.

Edith Wharton
Edith Wharton was an American novelist and short story writer, who is most famous for her Pulitzer Prize winning novel The Age of Innocence. Wharton was the first woman to win the Pulitzer Prize for literature. She was fluent in French and several other languages, and many of her published works are printed in both French and English. Wharton is praised for achieving both social satire and criticism in her work, while mastering the art of humor.

Zora Neale Hurston
An American folklorist, anthropologist, and author during the time of the Harlem Renaissance. Of Hurston’s four novels and more than 50 published short stories, plays, and essays, she is best known for her 1937 novel “Their Eyes Were Watching God.”

Between The Bookends Store

Be Sure To Check Out Our New Store

Check out Between the Bookends!